“Where the heck did all of these people come from Stella?”

“I don’t know Sam. The caterer says we’re running out of canapés and there aren’t enough tables, chairs, place settings, food and drinks for all of these extra people.”

“How many people were invited to the wedding Stella?”

“Amy had 250 on the original invitation list. Then, some people were offended, and there was a lot of pressure to invite more guests. We increased the list to 280 people.”

“Okay, but who are these extra 40 people? Where did they come from?”

“They just walked in the back door. No one was there to check invitations. They are just started mingling and helping themselves to everything as if they were invited wedding guests,” Stella replied.

“Well, the caterer just told me there are another 30 potential wedding crashers walking through the parking lot and they not only expect to enter the building, they expect to stay for the entire reception. What should we do Stella?” 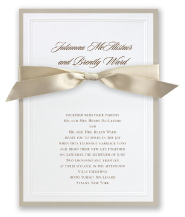 “The security guy said he overheard some of the crashers calling their friends and telling them there was a great party taking place and they should come and join in on the fun; have all they can eat and drink,” Sam groaned. “He is trying to guard the wedding presents, but that may not be an easy task.”

“There will be more than 350 here at the reception when we really only had the money and room to handle 250 wedding guests,” Stella lamented. “I had to borrow money from that Chinese couple we know to pay for this. We don’t have the income or savings to pay them back. How did this happen? What should we do? I don’t have a solution.”

It should come as no surprise that the population of the US and the world are both growing at a rapid pace. Change the numbers in the above scenario to millions and that is exactly what is taking place in the United States today. Most experts predict the population in America will exceed 350 million in the next ten years and surpass 400 million by 2050. 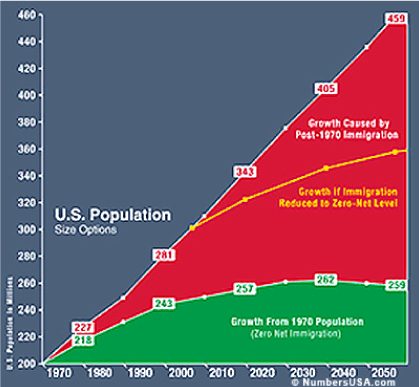 The US population reached 250 million in 1990, a number most thought was the absolute limit the country could afford, and absorb. Are the additional 75 million in the past 25 years stretching the limit? or is the population number limitless? Can we feed, clothe, house and keep another 30 million people safe?

While no reasonable person would deny the right of someone to be born, and live in America, the country does have a responsibility to provide an exceptional learning environment plus a stable economic opportunity to earn an excellent wage. The youth of America need an exceptional country to develop their many talents. The increasing national debt and decreasing student test scores are just two indicators that confirm America is not heading in the right direction to provide the type of country required for our youth to flourish.

The Solution for Uncontrolled Population Growth

The question Sam and Stella must answer for Amy’s children is “are we thinking about their future while we allow our politicians to spend the country into oblivion?” Increased services for the party crashers will cost more and more in the future. The federal government will have to decide how to distribute more than $400 billion (10 percent of revenues) annually to state, local and tribal governments to sustain adequate services for all.

Will our inflated currency have enough value for our citizens to afford the basic necessities of 350 million people? Can we grow enough non-GMO food to nourish the nation? Will there be good quality homes for all, or will increasing numbers be forced to live in sub-standard quarters? Is there enough fuel and energy to transport the goods we need, and to keep us warm in the winter?

Will our cities provide the same level of services like police, fire and emergency medical treatment for all citizens plus those who came in the back door plus those in the parking lot ready to crash the wedding reception? Will there be enough qualified physicians and medical personnel to treat 400 million people residing within the borders of this great country? More questions to ask our politicians and more questions that will go unanswered.

Good Government Works for the Future

Qualified leadership and an informed citizenry must step up and take action. Increased taxes and spending is not the answer. The country needs to “reboot” and clear out the viruses Washington has imposed on us. Keep the Constitution it works. Elect leaders who will work for America.

Good government acts for the future and for those who will live in that future. We must implement a Clear Vision for America. Wake up and enlighten others for our children’s sake. I am here to lead you to a bright future with 20/20: A Clear Vision for Our Future. You are my inspiration. Be a part of the narrative.

God Bless us all and God Save our America from this excessive burden. Our children, our Constitution, our culture, our country, our civilization, our liberty, our safety and our future need you now more than ever.