After the bombing inside St. George’s church in Tanta, about 50 miles north of Cairo. The explosion occurred after the authorities had sealed the main door to prevent attacks. (Credit Khaled Alfaqui/European Pressphoto Agency)

This may come as a surprise to most people, but Egypt and Syria were once the centers of Christianity. There were no Muslims in either country before 639 A.D.

The Coptic Church of Egypt and Ethiopia was founded in 42 A.D., and is the oldest Christian Denomination in the World. Its founder was Saint Mark who went back to his home country in Africa to spread the “Good News.” The church he founded is now under siege in Egypt, but still stands strong in Ethiopia.

The Egyptian Church is almost 2,000 years old. Christianity spread throughout Egypt within half a century of Saint Mark's arrival in Alexandria.

The Brutish Muslim conquest of Egypt

The ruthless Muslim invasion of Egypt took place in 639 A.D. Despite the political upheaval, the Egyptian population remained mainly Christian. However, gradual conversions to Islam over the centuries had changed Egypt from a Christian to a largely Muslim country by the end of the 12th century.

This conversion came about through the unhuman tactic of submit or die. These uncivilized conversions were not achieved through the peaceful teachings of love. They were accomplished by rape and murder. The Umayyads, headed by Abū Sufyān, were a largely merchant family of the Quraysh tribe centered in Mecca. Egypt's Umayyad rulers taxed Christians at a higher rate than Muslims, driving merchants towards Islam and undermining the economic base of the Coptic Church. Although the Coptic Church did not disappear, the Umayyad tax policies made it difficult for the church to retain the Egyptian elites.

There are about 18 million Coptic Orthodox Christians in the world. More than 15 million are found in Egypt under the jurisdiction of the Coptic Orthodox Church of Alexandria. Ethiopia, Libya, Sudan, Lebanon and the UAE are also home to Coptic Christians. They have the highest emigration rate, the lowest birthrate and the highest income level in Egypt.

The ISIS Killing Machine in Egypt 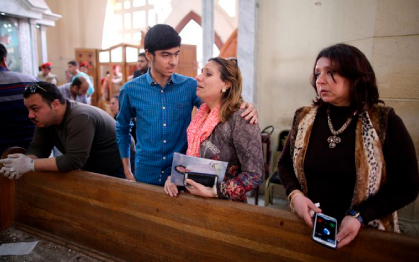 Christian Mourners at St. George’s have long complained of discrimination and sporadic violence at the hands of extremists. (Credit Mohamed Abd El Ghany/Reuters)

The Islamic State has claimed responsibility for explosions in Christian churches in Egypt. One such bombing occurred on a Palm Sunday that killed at least 40, including worshipers and police officers. “All of a sudden everything went dark,” one eyewitness said.

Two suicide bombings in Tanta, Egypt killed 44 Christians at Coptic churches. These attacks represent sinister, deadly days of violence against Christians in Egypt. Isis attacks present a challenge to the authority of the country’s leader, President Abdel Fattah el-Sisi, and to Tawadros II, the Pope of the Coptic Orthodox Church of Alexandria.

Sisi, a strongman leader, returned from a triumphant visit to the United States, where President Trump hailed him as a bulwark against Islamist violence. Trump made it clear that he was willing to overlook the record of mass detention, torture and extrajudicial killings during Mr. Sisi’s rule in favor of his ability to combat the Islamic State and defend minority Christians.

Sisi found himself on the defensive, and deployed troops to protect churches across the country prior to Pope Francis’s visit in April 2017. The Pope's visit came at a time when Egypt's Copts are facing an increased threat from extremist groups. Sisi rushed to assure Christians, who have traditionally been among his most vocal supporters.

The extermination and cleansing of Christians is the top priority of the IJETOF (Islamists). Their vision of a world submissive to Islam is real. America is a predominately Judeo-Christian country. We need to wake up and to enlighten ourselves and others that this madness, and the flawed practice of political correctness must be terminated.

It will take more than one person to purify this hideous immorality. It will take a majority of the more than 320 million American citizens to “Drain the Islamist Swamp.”

God Bless us all and God Save our American from this evil hatred. Our Constitution, our Bill of Rights, our American Flag, our culture, our country, our civilization, our children, our liberty, our safety and our future need you now more than ever.

Who is this guy? And What Does He Want?