I have been critical of President Obama for his demeaning demeanor while serving as forty-fourth president of the United States of America.

He blamed President Bush for every issue that crossed his mind and never took responsibility for the office he sought and was elected for. Now, as past president, he has resorted to an even lower calling: criticizing President Trump as he starts his new presidential term. Never has one of the 43 previous presidents been so utterly classless, clueless and disrespectful toward the office they once held.

Barack Obama has now embarked on a new campaign. He is continuing to break tradition as he backs Organizing for Action (OFA). None of us knows to what degree this is illegal or subversive. We do know it is bad for America. We also know Obama is cloaking himself in secrecy while this organization destroys our America.

Organizing for Action succeeds Organizing for America, which was formed under similar circumstances but operated under the control of the Democrat National Committee.

Organizing for Action (OFA) is a nonprofit 501(c)4 organization. It is a community organizing project advocating the agenda of Barack Obama. The organization is officially non-partisan, however its purpose, agenda and political policies are exclusively connected with the Democrat Party.

It is the successor of Obama's 2012 re-election campaign which succeeded Obama’s 2008 election campaign. The group mobilizes supporters of Obama's failed legislative policies. OFA can advocate for legislation but it is prohibited from specifically supporting political candidates.

OFA is headquartered in, guess where, Chicago. It’s a tax-exempt organization that seeks to harness the energy of the president's re-election campaign for future legislative fights. The group promotes policy issues such as gun violence prevention, abortion, climate change, LGBT issues, and immigration.

In February 2013, the New York Times reported donors contributing, or raising, $500,000 or more to Organizing for Action would be rewarded by putting them on the national advisory board, conferring the privilege of attending quarterly update meetings given by the president. White House Press Secretary Jay Carney repudiated that access to the President was being "sold" claiming that OFA was an independent organization. Messina told CBS News that the president might attend a "founder's summit" and "whether you're a volunteer, or a donor, we can't and we won't guarantee access to any government officials.”

The president and OFA officials deliver updates on the legislative process to Americans and organizations across the ideological spectrum. There could be occasions when members of Organizing for Action are included in those updates.

Questions have been raised about Organizing for Action continuing to maintain the www.barackobama.com website and control the @barackobama Twitter account. OFA's website claims it obtained its "digital" assets from Obama’s re-election effort and that he inspired the movement.

In short, it's the shadow government organization aimed at resisting and tearing down our Constitutional Republic.

Straight from the Saul Alinsky Playbook

I do not understand how living in a country with its Constitution established more than 225 years ago is for the first time in history having one of our former presidents set up a group called "Organizing for Action."

OFA has more than 30,000 members working to obstruct everything our president is trying to accomplish. This goes against our democratic system, it is an operation that will destroy our way of life. If this continues, we will be living in chaos very much like the third world countries Obama reveres. This should frighten every American as we are in worse trouble than we think.

Obama has stated he will stay involved through community organizing and speak out on the issues and that appears to be one post-administration promise he intends to keep. He moved many of his administration's henchmen to OFA.

OFA is behind the strategic and tactical implementation of the resistance we are seeing across America. They feed off the politically active courts that provide the leverage for this revolution. OFA is dedicated to organizing communities for "progressive" change. Truly, “regressive” transformation of our values and culture.

OFA members were propped up by the ex-president's message from the shadows:

Organizing is the building block of everything great we've accomplished. Organizers around the country are fighting for change in their communities - and OFA is one of the groups on the front lines. Commit to this work in 2016 and beyond.

Paul Sperry of the New York Post, says OFA will fight President Donald Trump at every turn of his presidency and Obama "will command them from a bunker less than two miles from the White House." He states Obama is setting up a shadow government to sabotage the new administration through a network of non-profits led by OFA, which has grown its war chest to more than $60 million with 250 offices nationwide. Obama and his wife oversee the operation from their home/ office near the White House.

Example of how OFA Operates 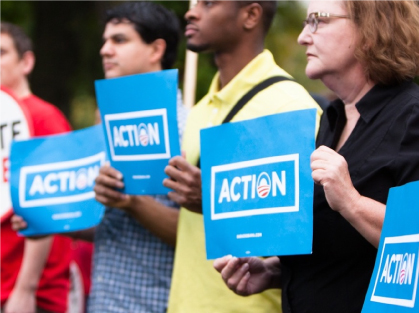 Trump issues an immigration executive order; OFA signals for protests and statements from pro-immigrant groups; ACLU lawyers file lawsuits in jurisdictions where activist judges obstruct the laws; volunteers are called to protest at airports and Congressional town hall meetings; the leftist media springs to action; the twitter sphere lights up with social media; violence follows - all emanating from Obama’s signal.

Barack Obama did not do enough to destroy our America in the 8 years he was in office. His future plans are to destroy the foundation on which this country has operated on for the last 241 years.

That means turning up the heat on climate change deniers, because the stakes are too high not to act.

It means calling for lawmakers to stop standing in the way of comprehensive immigration reform.

We’re helping people get health coverage, and telling the stories of the millions who are seeing the life-saving benefits of Obamacare.

We’re the ones rallying around the simple principle that love is love and that no one should ever be discriminated against because of who they are or whom they love.

We organize because too often a woman’s health care is debated as a political issue, not as a basic right.

And we believe that anyone who works hard and plays by the rules deserves a fair shot at the American dream.

The Muckster will continue to keep your informed. I am here to lead you out of the slimy past and into a bright future with 20/20: A Clear Vision for America.

God Bless us all and God Save our America from subversive organizations. Our Constitution, our Bill of Rights, our American Flag, our culture, our country, our civilization, our currency, our children, our liberty, our safety and our future need you now more than ever.