Doctors for the 99 Percent march from Zuccotti Park to St. Vincent's Hospital to demand its reopening and health care for all. October 26, 2011. (Image Credit: Michael Fleshman/cc)

The great debate over health care is not about health, or health care, at all. It’s all about who pays for health care. The political establishment wants complete control over who controls the money. Those that control the money, control the citizens. Can I make it any clearer than that?

America’s health care prices are increasing exponentially as our health is getting proportionally poorer. Prices are healthy, our health is impoverished. As Americans, we are getting sicker and unhealthier by the day. How many more ways can I write this? As the politicians gain more and more control over our lives, they also gain more and more control over our money. Their objective is a sick America which is so much easier to control than a healthy citizenry.

We are emphatically told that health care is a “right.” It is not a right in our Constitution. It is, in fact, a “dependency.” The political establishment needs us to be dependent on them for them to continue their stranglehold over us. This is from Chapter 2, Page 11 of: "20/20: A Clear Vision for America."

A democracy cannot exist as a permanent form of government. It can only exist until the voters discover that they can vote themselves largesse from the public treasury. From that moment on, the majority always votes for the candidates promising the most benefits from the public treasury with the result that a democracy always collapses over loose fiscal policy, always followed by a dictatorship. The average age of the world's greatest civilizations has been 200 years. These nations have progressed through this sequence: From bondage to spiritual faith; From spiritual faith to great courage; From courage to liberty; From liberty to abundance; From abundance to selfishness; From selfishness to apathy; From apathy to dependence; From dependence back into bondage.

From Dependence back into Bondage

Sadly, America is progressing from dependence back into bondage. The question, therefore is: should America take care for its residents, or should the residents take care of themselves?

We spend more than almost six times more than the other 16 industrialized nations spend on health care, and by every comprehensive measuring standard available, we come in at the bottom in effectiveness. Our health care cost will exceed our average income by 2035. 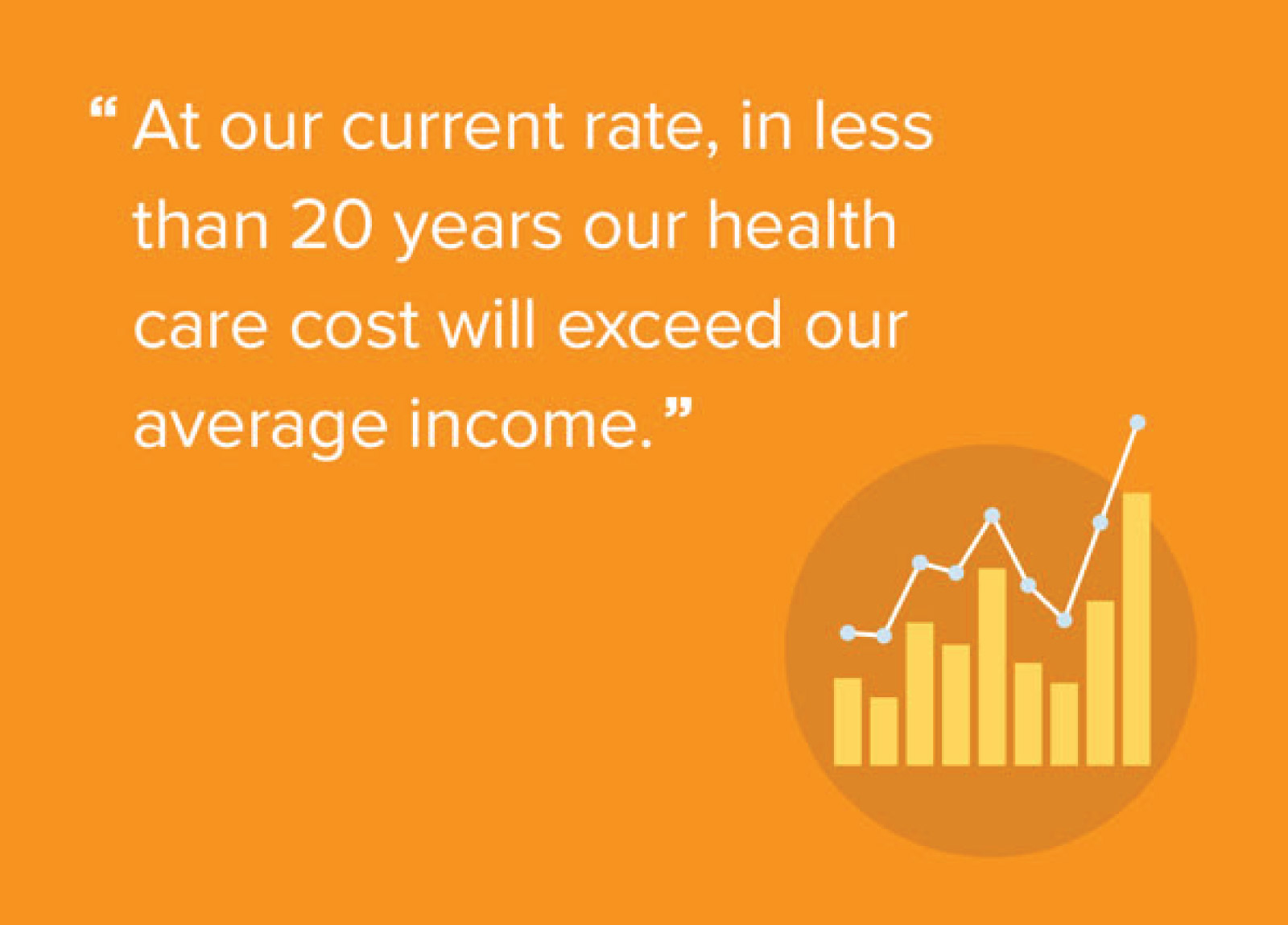 We need to look ourselves in the mirror and recognize that passing blame around is not going to solve our health care crisis. We should not be waiting for the doctor, or the hospital, or the insurance company, or the HMO, or the pharmaceutical company, or the government to make us well. We need to take control of the future of our own health, and that of our children, by making some tough decisions.

Will we continue to play the blame game, or are we going to get serious about the little things each of us can do every day to inspire healthier choices to make a healthier future for us and for our children?

Blame Doctors: Doctors come out of medical school in debt up to their smock. At that point, they decide to "double down" and get married. Then they double their debt ceiling on a house. Killing themselves working or billing their way out of this predicament are the doctor's only options.

Blame Hospitals: The unwritten rule now is, "Let's get him out of here before we kill him."

Blame Insurance Companies: Health insurance applications now consist of three questions. First, are you sick? Second, have you ever been sick? Third, are you ever going to be sick? Don’t say yes to any of the three.

Blame HMOs: Pretty straightforward here: "Get in the longest line to see the worst doctor possible."

Blame Pharmaceutical Companies: Many of the new drugs brought to market "designed" to replace existing drugs have been proven to be no more effective than those they replaced. The only difference in these "designer" drugs is the higher cost.

The Answer No One Want to Hear

We must take care of ourselves. Each one of us must become disciplined, develop a healthy regimen and stop depending on the federal government to take care of us from cradle to grave. Let’s drain the medical swamp.

TLBTV: The American Vision – America’s Journey Back into Bondage

God Bless us all and God Save our America. Our Constitution, our Bill of Rights, our American Flag, our culture, our country, our civilization, our children, our liberty, our safety and our future need you now more than ever.

Haitian Voodoo in the White House