It's not uncommon for animals to wander onto the lush grounds of golf courses. A golfer in South Africa came upon an unusual sight on the 14th hole and filmed two of the world's deadliest snakes locked in a confrontation that resembled a spiraling dance.

We’ve Seen This Movie Before

As I watched this video I couldn’t help but think this is what is happening in our own Swamp inside our own Beltway in Washington, DC. I spotted the resemblance immediately. One of the snakes was a GOAT snake and the other was a RHINO snake doing their annual “screw the taxpayer dance.”

Golfer Cara Treherne captured a video of the black mambas' fight and shared it with the Kruger Sightings YouTube channel and website LatestSightings.com. The black mamba holds a few impressive titles. It's the world's fastest land snake, the world's second-longest species of venomous snake, and one of the world’s deadliest snakes. Sounds just like the 535 that sneak around the Swamp.

Treherne said the fight seemed to go on for ages. (Just like our DC guys and gals fighting over the budget, health care, pork bills, etc.) "We debated about carrying on playing the hole, but after a little while longer, we decided to drive past them at a wide berth and go to the next hole," Cara told LatestSightings.com. "We found concentrating on golf quite difficult over the next few holes. I feel this was a once-in-a-lifetime sighting."

What a Delightful Analogy

I could not have found a more perfect analogy of the political establishment than this video. Two political parties pretending to fight over inconsequential crap they want us to think is important. We should avoid them and their machinations. Does anyone wonder why most Americans are completely turned off by politics and have no clue as to what these political snakes are colluding about. 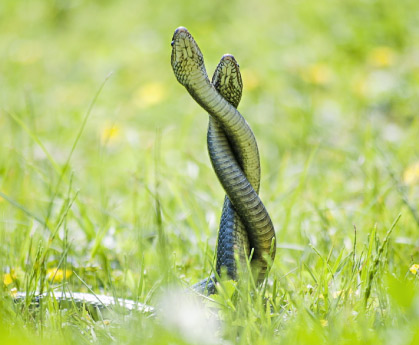 Venomous snakes tend to avoid biting or injuring each other during a fight, so their combat looks almost like a dance. Sound familiar? Our politicians do the same dance and then go out for dinner and drinks after the session, that is, when they do have their infrequent sessions. Most likely paid by lobbyists who are buying favor to get some pork barrel project “We the People” don’t want or need.

“It's rare for snakes to fight, and the reptiles are generally not territorial,” Melissa Amarello, co-founder and director of education for Advocates for Snake Preservation (ASP) told Live Science. “And outside of the breeding season, encounters between male snakes don't usually result in a fight.” Just like the do-nothing asps that represent themselves, not “We the People” in Congress.

"But males do engage in non-violent combat for females, which is likely what is happening in this video," Amarello said. "Snakes have only been observed fighting for access to a female, so I imagine there is a female black mamba nearby."

Proof Positive our Congress is a Snake Pit

“Venomous snakes, like the black mamba, do not usually bite or injure each other during a fight,” according to Amarello. “Their combat is therefore more of an elaborate wrestling match," she said. “Essentially, the snakes are trying to topple their opponent, asserting dominance.” Wow. Hit the adder on the head with that one. Makes one wonder who came first, the snakes or the congress?

Venomous or Nonvenomous? You decide.

“The dance-like movements are due to the snakes' lack of appendages, which forces them to coil around each other to try and take the other down. Combat and courtship are often confused in snakes, probably because people assume that snake fights would be violent," Amarello said. "But they are usually so peaceful that they are mistaken for courtship between a male and female."

“Fighting between nonvenomous snakes is more violent, however,” Amarello said. “These snakes fight closer to the ground, and will bite each other.”

We should have recognized these slithering congressional creatures and done something about them long ago. We should have paid attention. We should have cut them off at the head but we were too enamored with their promises of eating the forbidden fruit from the “Tree of Knowledge” in the Garden of Socialism.

The message is clear. Do we want a huge expansion of the welfare state promised us by the beltway vipers or do we want to be responsible, self-reliant Americans who know how to govern themselves?

Stay tuned. The Muckster is watching the DC Snake Pit and checking for venomous creatures that are lurking in the garden of opportunity. I am here to lead you out of this creepy past and into a bright future with 20/20: A Clear Vision for Our future. 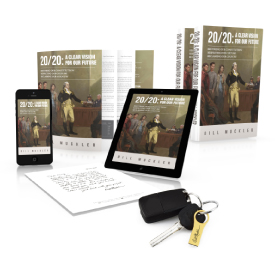 God Bless us all and God Save our American from congressional serpents. Our Constitution, our Bill of Rights, our American Flag, our culture, our country, our civilization, our currency, our children, our liberty, our safety and our future need you now more than ever.

The Paris Accord: Bad for America