President Trump went to Puerto Rico to survey the damage inflicted by Hurricane Maria, but how about taking a side trip to Haiti? He could follow in the footsteps of previous presidents Clinton and Obama? Why, you ask? Witchcraft is practiced in the White House. 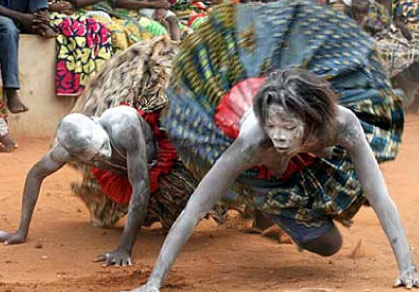 Remember when the Obama White House was all abuzz with talk of witchcraft by first grandmother, 72-year-old Marian Robinson, who lived in the White House residence. A close friend of Michelle Obama said the president was furious at his mother-in-law after learning that she was practicing Santeria, an African spirit cult, in the White House.

Obama was quite upset about this on two different levels. First, he is supposedly a Christian, no matter what his critics say about Reverend Wright. He is adamant that Sasha and Malia be raised with Christian influences. He does not want them to be involved with African voodoo. And secondly, he was worried about the political fallout if his enemies get wind of this. "Rev. Wright was bad enough, but this could be political suicide," a close friend of Michelle's confided.

Religion took center stage during the 2008 campaign when videos showed the Rev. Jeremiah Wright shouting, "God damn America." Obama was forced to distance himself from the since-retired pastor at Trinity United Church of Christ in Chicago, where he worshiped for 20 years. Many people were shocked by the videos and questioned Obama's fitness to be president. Obama avoided worshiping in public and preferred the chapel at the presidential retreat at Camp David. This is the same “Campaigner-in-Chief” who accused conservatives of “clinging to their guns and religion.”

Grandma Didn’t Have a Bible

This is how it happened. Marian Robinson became increasingly frustrated as her husband, Fraser Robinson, was hobbled by multiple sclerosis in the late 1980s. The family pastor prayed with her and counseled her, but "she turned to Santeria in a desperate hope," Michelle's friend said.

Michelle put her foot down when she heard that her mother took her dad to ceremonies where they did spells and trances, and sacrificed animals, chickens and goats. But Marian was desperate and kept going anyway, even when her husband was too sick to go with her. Apparently, Obama didn’t know anything about this earlier because it was before they met. Michelle and Craig (her brother) wanted to close the book on this and never talked about it again after their father died in 1991.

The first grandma invited an old friend from Chicago to visit her at the White House where she performed a Santeria ceremony in the residence. When Michelle saw this woman, a voodoo priestess she recognized her from when her father was sick, she threw a temper tantrum. When she told the president about it, he blew up as well and said, “No voodoo in the White House. Absolutely. I don't care what you call it.”

The president was "totally in favor" when his mother-in-law moved into the White House as a live-in babysitter for 11-year-old Malia and 8-year-old Sasha. Obama reportedly told Michelle that he would ship her mother back to Chicago if she didn’t stop this witchcraft mumbo-jumbo, and ordered the Secret Service to never allow Marian's friend to return to the White House.

Stories on the Clinton Foundation's high-profile work in Haiti shows Bill and Hillary Clinton's interest in the country goes back much, much further than that. 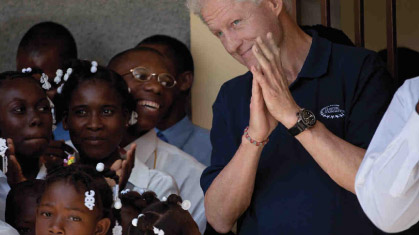 In his memoir "My Life", the former president wrote a vivid account of a trip they made to Haiti in 1975. This was a wedding gift from their friend David Edwards, who had some business to do there for Citibank and some extra frequent flyer miles.

Bill Clinton wrote that "the most interesting day of the trip" came when he, Hillary and Edwards got a chance to see voodoo in practice in a village near Port-au-Prince. The priest was Max Beauvoir, a former chemical engineer who had studied at the Sorbonne in Paris. Beauvoir had abandoned that career when his voodoo-priest grandfather died and named him as his successor.

Voodoo Theology 101 Beauvoir gave the them a brief course in voodoo theology. The late-afternoon ceremony began was caused Clinton to write:

After several minutes of rhythmic dancing to pounding drums, the spirits arrived, seizing a woman and a man. The man proceeded to rub a burning torch all over his body and walk on hot coals without being burned. The woman, in a frenzy, screamed repeatedly, then grabbed a live chicken and bit its head off. Then the spirits left and those who had been possessed fell to the ground.

Clinton wrote that his "brief foray into the world of voodoo" furthered his fascination with "the way different cultures try to make sense of life, nature, and the virtually universal belief that there is a nonphysical spirit force at work in the world."

The Evolution of a President

The trip to Haiti also came at a pivotal time for Clinton himself. He had lost the political campaign he had waged for a Congressional seat. He had to decide if it was worth running for office again. There was an opening for Arkansas attorney general.

"By the time we got back from Haiti, I had determined to run for attorney general," Clinton recalled. This time, he won— and was on his way to the White House. One lesson he took from Haiti, he wrote: "The Lord works in mysterious ways."

The Trumps in the White House

Melania recited the Lord’s Prayer at a Trump rally in Melbourne, Florida.

Just sayin’. The Muckster sees a different tone in the White House today. I see a different culture. I much prefer the folks who are clinging to their guns and bibles. I’ll take them every day. I just trust them more. Just sayin’.

It will take more than one person to purify our America from the hideous immorality that is permeating our country. It will take a majority of the more than 320 million American citizens to “Drain the Sinful Swamp.”

Where there is no vision, the people perish:" Proverbs 29:18

TLBTV: The American Vision #10 – The Income Tax Rate should be ZERO

God Bless us all and God Save our America. Our Constitution, our Bill of Rights, our American Flag, our culture, our country, our civilization, our children, our liberty, our safety and our future need you now more than ever.