Who is this guy? And What Does He Want?

Good questions. He wants you to bow down and pray to Mecca five times each day, or he wants you DEAD. He has a plan to replace your constitution with his Koran and force you and all Americans submit to him. He wants an One-World Islamic World with one religion: Islam. 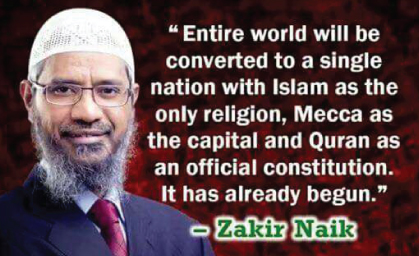 His name is Zakir Abdul Karim Naik, born on October 18, 1965 in Mumbai. He is an Indian Islamic preacher who founded, and is president of, the Islamic Research Foundation (IRF). He is also the founder of the "comparative religion" Peace TV channel through by which he reaches a reported 100 million Islamic viewers. He is the most influential Salafi ideologue in India, the rock star of tele-evangelism and a proponent of modern Islam. He’s the world's leading Salafi evangelist and he lectures in English in a suit and tie.

A Salafi is a member of a strictly orthodox Sunni Muslim sect advocating a return to the early Islam of the Koran and Sunna.

Zakir Abdul Karim Naik has published versions of lectures on Islam and comparative religion. He is regarded as an exponent of the Salafi ideology, and is a radical Islamic televangelist propagating radical Wahhabism. His preaching is currently banned in India, Bangladesh, Canada and the United Kingdom. That should answer the question.

The Salafist doctrine can be summed up as taking "a fundamentalist approach to Islam, emulating Muhammad and his earliest followers: al-salaf al-salih.” (the pious forefathers.) They reject religious innovation, or bid'ah, and support the implementation of sharia (Islamic law). This is pure fascism, not religion.

America’s Founding Fathers wrote your Constitution which gives you rights including freedom of religion; shall make no law respecting an establishment of religion, or prohibiting the free exercise thereof;

These two ideologies are diametrically opposed. They cannot co-exist. Period.

Zakir Abdul Karim Naik has published versions of lectures on Islam and comparative religion. He is regarded as an exponent of the Salafi ideology, and is a radical Islamic  televangelist  propagating  radical  Wahhabism. His preaching is currently banned in India,  Bangladesh, Canada and the United Kingdom. 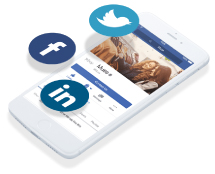 Zakir Abdul Karim Naik has 16 million followers on Facebook, 150,000 on Twitter and has given more than 4,000 lectures on Islam across the world. But the popular televangelist and Islamic preacher, is now wanted by the Indian authorities. Bangladeshi authorities said that one of the gunmen responsible for an attack on a cafe in the Bangladeshi capital, Dhaka, which left 22 people dead, was inspired by him.

Syria and Egypt: America Next?

Syria and Egypt were the centers of early Christianity. They were 100 percent Christian countries in the year 600 AD. What happened? They either submitted or they were beheaded. Now they are Islamist nations. If America continues its insane path of political correctness you will be the next to make the decision: bow to Mecca or lose your head.

Meet the Next Democrat President

The Democratic “Regressive” left under President Lyndon Johnson's "Great Society" social agenda in 1965 has spent more than $5 trillion, plus time and effort, catering to special groups specifically to harvest voter loyalty. The Black community, followed by the Latinos, and most recently, the LGBTQ community are recipients. The results of this "Social Engineering" agenda is best explained by historical fact.

The next group to be embraced will be the Muslim community to sustain their leftist popularity and political security. With an extraordinarily high birth rate and an increased drive to "ISLAMICIZATION."

With the ideological support of Naik and the IRF we can visualize a young, good looking, highly educated, articulate Muslim politician to represent a new densely populated Muslim state or country. The rise of Abdul El-Sayed of Michigan could indeed be that new messiah. Déjà vu anyone?

One person cannot purify this hideous immorality. It will take a majority of the more than 320 million American citizens to “Drain this Islamic Swamp.”